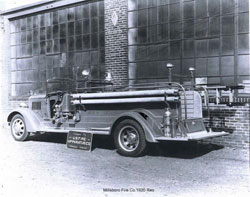 In the early 1900's, residents of the Community of Millsboro recalled the threat of fire being an ever present concern. Wooden buildings, stores and homes alike were tinder dry, and fires would spread rapidly to nearby structures, compounding original losses. Fires were fought with a man-powered pump drawn by horses and a bucket brigade. Major fires, such as the 1905 fire which consumed the old Methodist Church and a dwelling beside it, and the 1915 fire which destroyed Burton's store and a nearby home, were fought by men who were most willing, but often their efforts were in vain because of poor equipment. During this time, notification of a fire was made through the ringing of one of two bells at the original Grace Methodist Church. The fire bell had a distinctive sound, being in different size and tone than the normal church bell used to summon worshippers on Sunday morning.

The first piece of fire equipment, a hand-drawn pumper, was purchased in 1905. This included a hand-drawn tank wagon to carry water, built by the Fire Company volunteers themselves. This hand-drawn unit was replaced sometime later by the first motorized apparatus, a Model T chassis on which the original pumper was installed.

Evidence exists that the Millsboro Fire Company was organized in 1918, but records show the organization was not officially incorporated until March 2, 1924, when members of the Community of Millsboro felt a need for organized fire protection in the area. On that date, J. Reese White, William J. Rose and Walter P. Monroe signed the paperwork that officially incorporated the Fire Company. In September of that same year, J. Reese White was elected as the Company's first President and Beverly W. Hickman installed as the first Chief.

1926 was a milestone in the Company's history, with the purchase in June of their first piece of motorized apparatus and their first fire siren in December.

The Fire Company's first home was located on the old school yard, which is now the location of Grace United Methodist Church. In 1929, the organization purchased a parcel of property on State Street, and the following year completed their building at a cost of $10,000. This building still stands today, as part of the new firehouse which was erected in 2000. 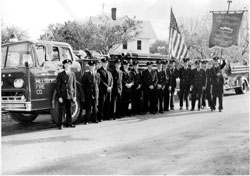 1935 saw the purchase of the Company's second piece of apparatus as a new Reo engine, built in Wilmington, Delaware by U. S. Fire Apparatus Company, was delivered in October of that year.

This engine, designated 83-5, was later recovered from a farmer's barn, given back to the volunteers of the Fire Company and eventually refurbished. This engine, along with the Company's 1942 Ford pumper, are currently on display along with other firefighting memorabilia in our museum.

The Fire Company continues to proudly serve the Town of Millsboro and its surrounding district with a roster of approximately 74 active volunteer firefighters, Fire Police and Ladies Auxiliary members, plus 9 paid EMS Ambulance Associates. This is accomplished with a total of 19 pieces of state-of-the-art firefighting apparatus, operating out of our main station on State Street. With the support of the community and surrounding residents, the Fire Company will continue to provide Fire and EMS protection long into the future.